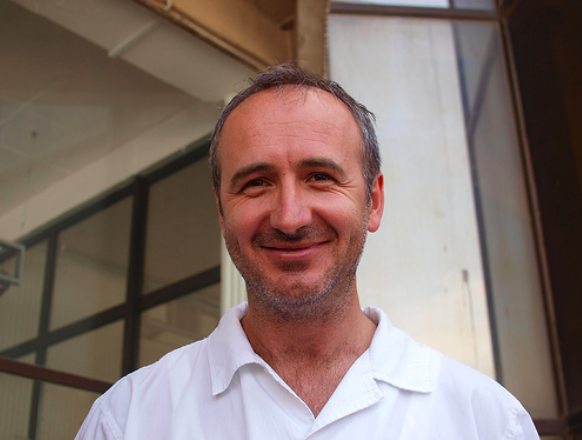 Dan Oki is artistic name of Slobodan Jokic. Born in Zadar, Croatia, in 1965. As a young filmmaker, he became a member of an underground film movement and from 1984 to 1990, he made several experimental and documentary films on Super8mm and 16mm materials in the frame of the socialist film collectives called Kino Klubs. In the same time, he studied Journalism and Political Science at the University of Zagreb. In 1990, he moved to London where he followed the courses at the London Film Makers CO-OP and Video Umbrella; in the early 1991 he went to the Netherlands to study Film and Media Arts, where he obtained his MA at the Hogeschool voor de Kunsten (Institute of Arts) in Arnhem in 1996. During his studies, he worked as an editor and director of the weekly art TV programme on a television station in Amsterdam, and that gave him an opportunity to experiment and develop his knowledge and skills in video and TV production. From 1996 to 1997, he was the head of Media Artists Association in Amsterdam. In the period from 1990 to 1999, he was working primarily with digital media in the context of animation, video art and experimental cinema. His works were screened and got prizes at prominent international festivals and art venues around the world. He enrolled the Feature Film Directing Courses at the Maurits Binger Film Institute in Amsterdam in 1998. His film production house Dan Oki Productions was founded in Amsterdam, and Dan Oki started shooting his first feature film Oxygen4, as a small Dutch-Croatian co-production in April- May 2001. He got an opportunity to live in New York for a year, and he decided to move to USA together with his family. Unfortunately they were living on Franklin street close to WTC which was attacked a couple of days after they moved to New York. Staying close by Ground Zero was impossible and they moved to Brooklyn. After just a couple of months in New York he got an offer to become a fully employed assistant professor for Film and Media Arts at the Art Academy of the University in Split, so he moved back to Croatia in February 2002. Oxygen4 was finished at the beginning of 2004 and it had a couple of premiers at the Film Festivals. The film was also shown as serial of video installations in a solo exhibition at the Museum of Contemporary Art in Zagreb in 2004. In 2005 he was the founding Head of the Film and Video Department at the Arts Academy in Split. From 2006 to 2009 he was also teaching at the Film Academy in Zagreb. It was the course he conceived under the title Experiment in the Feature Film. After he gained the status of a full professor and wrote BA and MA study programs which are still being taught, he wanted to start making feature fiction films again. Dan Oki got his sabbatical year in 2010 at the Academy of Arts in Split, and as a producer, writer and director he made three new feature fiction films in a row: The Performance, The Dark and The Farewell (the last mentioned in post-production). The films were screened at Festivals internationally, released in cinema and bought by Croatian National Television. Dan Oki is now completely devoted to fiction film making.